FYI – A new record was set at Christie’s auction house on Novemeber 12, 2013 – when Francis Bacon’s 1969 painting, “Three Studies of Lucian Freud,” was sold for more than $142 million dollars-

and as Marion Boddy-Evans put it – there is now another new “Most Expensive Painting.”         More details here. Bacon’s triptych (of his fellow artist) beat the 2012 record set when Munch’s “The Scream” sold for 120 million (Sotheby’s).

Another record was broken on November 12th as well, which was for the sale of art of a living artist, when Jeff Koon’s “Balloon Dog (Orange)” was sold anonymously via phone for 58.4 million. It stands 12 feet high and is made of stainless steel!  The orange dog is from a series and the others, which are yellow, blue, magenta and red, are in private collections (i.e. Steven Cohen has the yellow Balloon Dog and Eli Broad’s blue one can be seen in LA’s County Museum of Art).  Check out the Exhibition Inquisition WordPress blog for more about Koon’s work. 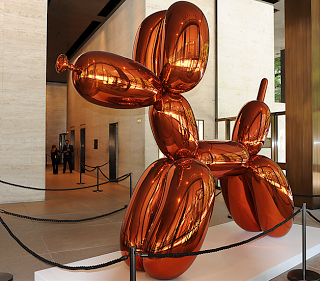 So to all the artists art there – keep doing what you do! – Of course – the monetary aim is not the primary concern (or a concern at all) for “most” artists who create and design wonderful art, but wow, you just never know what will catch on and what will one day be viewed in a way that brings in millions….you just never know! So keep doin’ what you do!

One thought on “Another ‘Most Expensive Painting’”

The Writing Challenge That Knows You Have A Life
Chocolate'n'Waffles
A Dad trying to cope with the loss of his Partner and becoming a single parent.

Just a girl interested in science journalism and writing about my adventures.