Paul Klee once said, “A drawing is simply a line going for a walk.”

In response to the Word a Week Photo Challenge, which is “LINES” this week, I decided to share some pictures from PAUL KLEE!

He started life as a violin-playing child prodigy, but as a teenager he found his life calling to pursue visual arts!  His unique style, which was influenced by  surrealism, cubism and expressionism, gave the world varied, colorful pieces that were sometimes scored, etched, and even scraped with needles onto blackened glass! Side note, for any challenge on lines, I normally would refer to Piet Mondrian because his work offers GREAT use of LINE!  Especially Mondrian’s later grid work – with those stabilizing black lines and his rich use of clever placement of primary colors (red, yellow and blue) with insertions of different grays and whites too! –

However, I already wrote about Piet in the post on Maxine’s Mondrian – and so the German artist Paul Klee was my next choice.

One last thing, which is more of an aside from lines, but here is a copy of Klee’s charcoal and watercolor painting titled “Broken Mask” (1934). 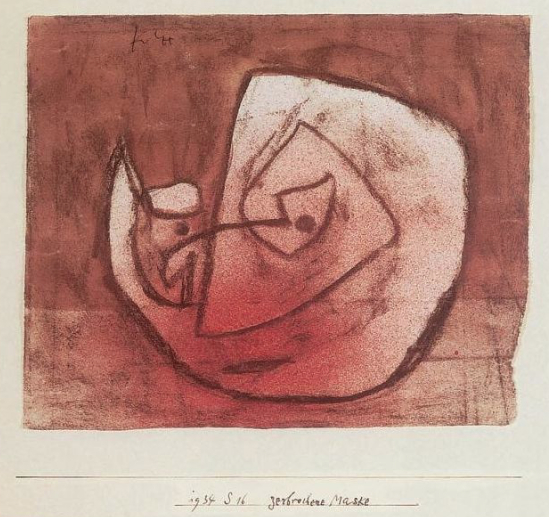 I have always liked this piece by Klee – because it is done with watercolor spatters over the charcoal, which can be seen in clearer copies, and the small book I have wight his in it has been a great resource for working with students.

However, I also like it because the face is a bit mysterious (to me at least).  I wonder if Klee was showing relief from having a mask broken, or if he was showing humiliation? – Or maybe a bit of both? hmmm.