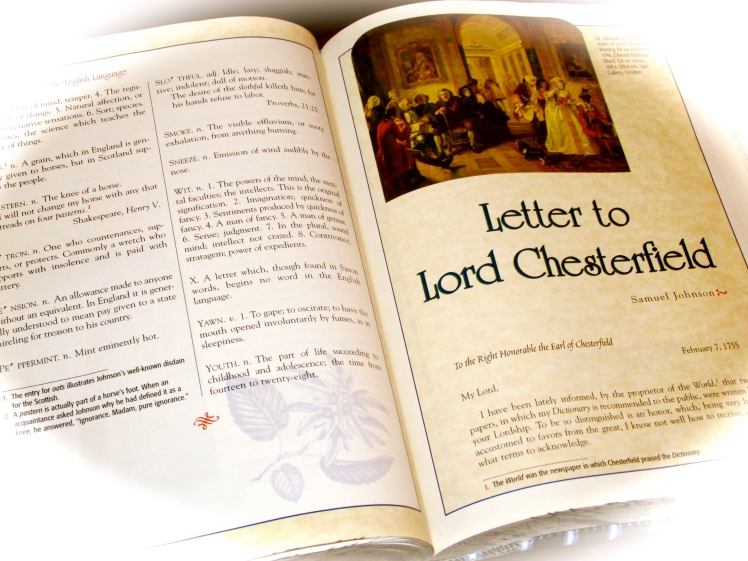 The photo challenge word this week is “inside” – and here is the INSIDE PAGE from my son’s British Lit textbook – opened up to a lesson on Samuel Johnson.  The prompt made me think of how there are many gems on the inside pages of books!  Also, thought I would use a list to briefly share some fun tidbits about Johnson!

As an infant, Johnson had tuberculosis, which left him deaf in one ear and blind in one eye.  His family had been crippled with debt and so he endured poverty.

As a young adult, he had to leave Oxford due to lack of money and then he lost (most of) his wife’s dowry when the school he started had to be closed.

He was jailed for debt, and while he did make a little money from his writing, he had financial hardship until (while in his 50’s) he finally received a small pension from  King George III.

He also survived a stroke, gout, depression – and he likely had what we now call OCD and had tics from Tourette Syndrome.

9. He is one of the most quoted British writers ever!

Only second to Shakespeare!

8. One of Samuel Johnson’s quotes reveals “part” of what helped him persevere:

Johnson said, “Almost every man has some ART, by which he steals his thought away from his present state.”

7. He was a man of great faith, and he “chose the role of pedagogue rather than evangelist.”

I think that is cool.

6.  Johnson gave to others – not from wealth – but he gave from the little he had!

Johnson likely was generous with the little he had because he was not governed by money – and also because he knew what it was like to be in need and he had a generous heart.

“And just as he would give all the silver in his pocket to the poor who watched him as he left the house, so, on returning late at night, he for years had been putting pennies into the hands of children lying asleep on thresholds so that they could buy breakfast in the morning.”

5. He gave up alcohol because it was a weak area for him.

Johnson knew it was NOT good for him to drink alcohol anymore (because of his health issues, but also because he tended to drink in excess).

“Sir, I have no objection to a man’s drinking wine, if he can do it in moderation. I found myself apt to go to excess in it, and therefore, after having been for some time without it on account of illness, I thought it better not to return to it. Every man is to judge for himself, according to the effects, which he experiences. One of the fathers tells us, he found fasting made him so peevish that he did not practice it.”

4. Johnson was a poet, essayist, moralist, literary critic, and lexicographer.

Johnson wrote an entire dictionary in 8 years – which was really quick time frame. It was scholarly, but also filled with subjective comments (like his “oats” definition was a slam on the Scots).

3. Johnson was humble, straightforward, generous, friendly, and helpful – while he also was sarcastic and witty.

A lady once asked Johnson why he incorrectly referred to the word “pastern” as being a horse’s foot (when it is a knee) and he replied, “Ignorance, Madam, pure ignorance.”

2. Johnson provided an example of healthy confronting (assertively speaking up) to someone who hurt him.

In Letter to Lord Chesterfield, Johnson sarcastically, but courteously (and directly!) clarifies that he (Johnson) was hurt when Chesterfield did not financially help the dictionary project when it needed support – and so now…. once the dictionary is completed – well Chesterfield CANNOT dare take credit for any of its success.

1. And lastly, we learned that Samuel Johnson was a good tipper!

When Johnson dined out, he had the wisdom to know that when you take care of the wait staff, they will then take care of you.

“The tip paid off in that the waiter often managed a better cut of meat for him than for his friends who drank wine but did not tip.”

Here is a portrait of Samuel Johnson by artist Joshua Reynolds. (Click on the photo for more artist info.)

~ Check out Russell Boyle’s blog if you want to read a Samuel Johnson poem.

~The “inside page” photograph was taken from Glencoe’s British Lit textbook.

The Writing Challenge That Knows You Have A Life
Chocolate'n'Waffles
A Dad trying to cope with the loss of his Partner and becoming a single parent.