For my November walk with restless Jo, I invite you to join me as I share some photos from Our Lady of Victory (OLV) Basilica in Lackawanna, NY.

I was going to make this two posts, but it is easier for me to combine it into one post and so part 1 has OLV and part 2 has some tidbits and reflections.

Isn’t this a fun name for a small little suburb of Buffalo? – Lack- a – wanna…

well I guess the name was derived from the Lackawanna Steel Company, which was connected to the parent company of Bethlehem Steel. I hope to get some photos of the closed down Bethlehem Steel plants on a future trip to this area.

When I was in Buffalo in late November 2013, I drove by the OLV Basillica on a quiet, light snow morning and I was enamored with its beauty. I also realized I had never been inside of this majestic place and so I made a vow to visit someday.  That someday happened to be this month and I made a collage and slide show with some of my pics.

A bit more info about Lackawanna….

I was surprised to hear the Lackawanna name in the news last year (2015) when a terrorist cell was found there (hiding out in this small town with less than 18,000 people).  The PBS investigation coverage is HERE and here is a snippet from the Buffalo News:

Two of my memories from the small, decaying town of Lackawanna involve cheering at a playoff football game (early 80’s) at the small “Ron Jaworski” stadium, which is now called Veteran’s Stadium, and I had a work friend from Lackawanna (she was a hostess at a restaurant I worked at in ’87).

Wait, there is one more memory connected with this town of Lackawanna, although I never made the connection until last week when we were standing there looking at the tomb of Father Baker.

“Hey, wait a second, is this the Father Baker people joked about while we were growing up?” I asked my sister-n-law.

“Yes,” she replied, “This is him.” We both chuckled about the memory of folks saying they were going to call Father Baker when children were behaving badly.

Somewhere in my distant memory, I could hear the name Father Baker being used to instill fear….

You see, the threat of calling “Father Baker” was sometimes used by adults to help a child self-correct bad behavior.

I recall being at someone’s house when someone (half jokingly) picked up a phone while telling a child, “I am calling Father Baker if you don’t stop.”

Never knew what it meant, and still don’t, but I did find this “Buffalo kid’s nightmare” shirt image:

I purposefully aim to not write regularly about religion or politics on this particular blog, but I do quickly want to mention religiosity while posting about a National Shrine that was officially designated a Minor Basilica by Pope Pius XI.

Well first, isn’t it ironic that this humble man, noted for minimalism, had such ornate taste with his grand aim to bring a massive, European inspired church to Western New York.  I mean – they added 46 different types of marble – not sure if you realize what that means, but just the marble alone will pause you in your steps – simple amazing. The entire structure is a work of art and I HIGHLY recommend you put this place on your visit (it is really close to Niagara Falls and there are other things to see). Also, did you know that at the time this Basilica was completed, the dome on it was the second largest in the nation (only the Nation’s capitol had a larger one at that time) – ((and funny how nowadays, in 2016, homeowners are often adding domes to their everyday homes, my times have changed))

Oh and side note here with a message for Smithsonian’s Aerial America show (here), Listen up writers – because as you rudely passed over and left out the entire city of Buffalo in episode 18, you failed to have a complete representation of New York State.  All that time you spent covering Kodak in Rochester, NY could have made room for a little bit more from Buffalo – and maybe have included this OLV Basilica, which is spectacular in spite of its waning location.  Yeah, I get it that Buffalo is not the city it once used to be, but to ignore Buffalo like that in your New York episode was anemic and wrong –  and I say shame on your writers for ignoring Buffalo like that….

Anyhow, the humble Father Baker was also quite a motivating and savvy business man because starting off with no money for the church project in 1921, Baker’s talented team finished the Basilica on-time in 1926, and it was a debt-free project (tip of the hat).

I appreciate the beauty and reverence of such majestic places.

I feel the awe and I soak up the wonderful vibe with such ornate places designated as Holy and sanctified.

However, my problem with such ostentatious buildings has to do with how people sometimes let religion keep them FROM God.

My thoughts on this go beyond the Catholic faith, and I respect Catholic Christians, I do.

But you see, too often people have cloudy versions of God – versions skewed with fear, gaudy shrines, and idols pulling them from God; consequently, people miss out on a relationship with God and miss out on personal joy and peace. We are the church and we bring our sanctuary with us and sometimes religious shrines and rote rituals lead people away from God…just sayin’….. and I invite you to rethink your view of your God and your approach. Has religion turned you off in such a way to where you have shunned God completely?  If so, maybe, just maybe, it is time to revisit this topic.  This is between you and God and so go to Him directly and ask for truth to be revealed.

Sometimes humans get lost in religion, which is man-made! We see this with the terrorists who do evil and deadly things for their religion, but it can be seen in other groups too – where people are left feeling cold, pissed off, as they feel emptiness with spiritual bankruptcy. Religion is not the same thing as faith, which is the spiritual connection to God that goes beyond religious activity and places of worship – it’s a heart thing.

Ok, enough from me on this topic, but please know that I respect the Catholic faith, which has a powerful presence in Western New York – and look at this little display I saw while out on a power walk one morning. As I walked by I smiled and then went back to capture a picture: we have the boat (left), mums and shrubs, some pumpkins, and Mary! 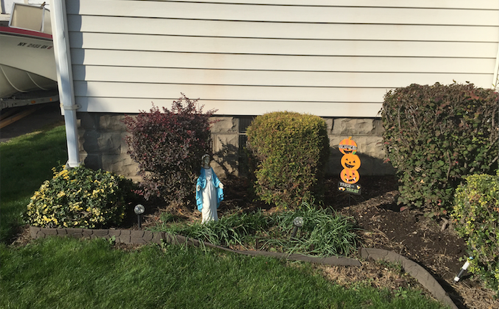 Okay, hope you have a great day

If you want to see more walks, or if you have time to join in on a walk with restless Jo, go here, where this week Jo brings us back in time to a castle.

11 thoughts on “Our Lady of Victory Basilica Lackawanna, NY (walk with Jo)”

When you choose an alternative lifestyle with no idea what you're doing and make it up as you go.

Art is the Struggle to Understand

My adventures while living in China

My Pen Writes of You

Ideas and Advice for How To Live a Joyful and Empowered Life.

Join us on the journey

The home of all things books

Philosophy is all about being curious, asking basic questions. And it can be fun!

Philosopher Mouse of the Hedge

On The Streets Where We Live

Gather around everyone! It's storytime!!!

When I'm not plotting my next book, I watch movies and television programs, both new and old, on Acorn TV, Amazon, BritBox, Hulu, Apple TV, and Netflix. Afterward, I write reviews and scatter popcorn kernels. Whatever floats your remote is fine with me.

A Round of Words in 80 Days: The Writing Challenge That Knows You Have A Life

The Writing Challenge That Knows You Have A Life