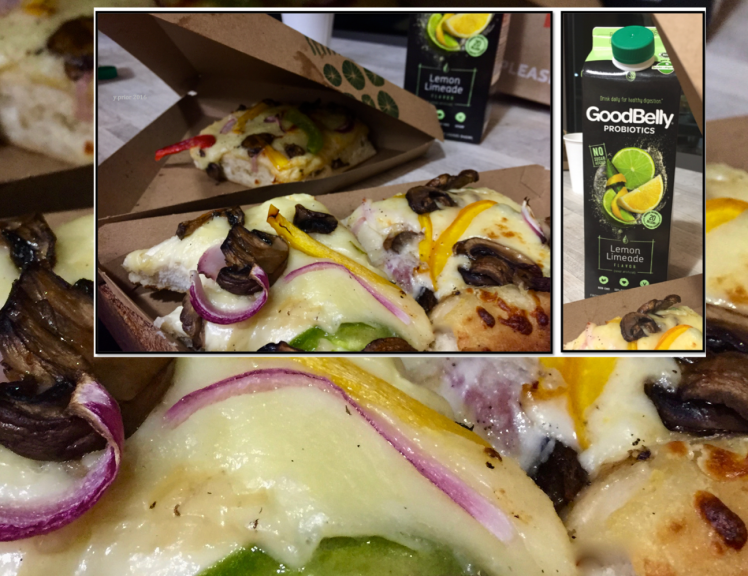 The above pizza was delicious. A little too much crust for me personally – but when we were at Whole Foods they only had a few pies available.  The pizza guy offered to make us any type that we wanted – to serve even by the slice (great customer service) –  but we did not want to wait.

Notice the drink?  I do not have any affiliate links here and so this is just to share about a cool new drink.

Goodbelly limeade was on sale so we tried it- well wait – I also tried it because it had no added sugar and almost no sugar.  (I am not anti-sugar, but I cannot have very much of it – I can have “some” compared to none before….) – It is so tough to find beverages that do not have loads of sugar. Most have 18 grams or more of sugar per serving.  Some have 30 or 40 grams- argh.

The Goodbelly limeade was not only all natural and low (with almost no) sugar, but this company also had the brilliant idea of adding in a mix of probiotics.

The different probiotics are like sending in the special armed forces into your digestive track.

I have been drinking kefir for a while now, which is great with 12 strains of probiotics. However, sometimes I want something different and this limeade was a nice alternative – which was also a dense probiotic drink.

It went really well with pizza. Not as good as an ice-cold beer would have been – but hey – sometimes we need to get in some good flora…..

I am not going to host Friday Food as a challenge anymore, but I will still share some Friday Food posts once in a while.

CURRENT MONTH:  January 2017: Pizza (or any dish served on a base – it can be a veggie base, polenta, english muffin, portabella, or any pizza dough).

LOVE IS THE ANSWER

A man with dyslexia writing about this and that and everything else!

Revelation 1:8 NIV I am Alpha and Omega, the beginning and the ending, said the Lord, which is, and which was, and which is to come, the Almighty.