I am changing my Sunday Post a little because of the Black and White photo for Paula’s challenge had some fun commenting.

(Isn’t this a fun part of blogging – sharing and connecting?)

Had to provide some back story to that photo.

Here is the picture of the cards from the post for Paula’s After/Before challenge:

Here is the booth that was selling the cards: 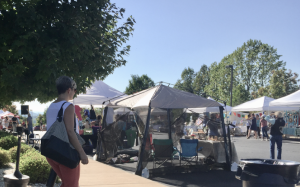 Here is the collage from this part of the day: Back Story: My mother and I went to a few art shows when she was here in September. The second show was the Art-Cho. We arrived there at 4 and things were shutting down – it was supposed to go til 6. We were near the end of a long four days and so it was actually better that it was winding down. We thought about buying something, but the booth attendants were not very good sales folks (just sayin’) and the lady with the greeting cards walked away when we asked prices. She said, “Depends” – and left for a long couple minutes. Maybe that was her way of allowing someone to browse freely, but letting us know prices would have helped. I was not in the mood to have each piece itemized verbally- and she likely was not either – and too bad because I was thinking about the “write on” card for a sweet author friend of mine. But wouldn’t want it anyway if the card maker was such a grump. No thanks. Almost deleted my pic of it…. Then as we exited, they had stacks of event T-shirts for sale. I mean, for donation. Once again, no prices. Now I really did not want a T-shirt from an event – (could already see it going away later in a donation bag) but I guess I was thinking my mom and I could have the shirts as a memento. Partly because when she was here in early summer, we were off somewhere for the 4th and she walked out of her room and offered me a matching red tank top. “Mom, I don’t want to wear matching tank tops.” (We have never worn matching clothes – so this was new for me – maybe she and my older sis have done this before – but I have not.) “Oh, well, I just thought maybe,” she said as she walked away. A few minutes later, softening up, I told her I would try it on…. and it turned out to be a nice soft fabric and so there we were – in our coordinated red tanks on the 4th. (omg… I noticed that my mother is bit more sentimental this year.) Anyhow, I think this was in my mind as we passed the T-Shirts.  Also, I rather liked the ART CHO logo and colors. Well the T-shirts were 15 dollars – which might not sound like a lot – but at the end of the day like that – our max to pay was 10 – but the guy was obviously not a sales guy because he let us walk away. So let’s see – the art show ended early – you have three boxes of “this year’s” T-Shirts left – and you are being a stickler on the “donation” suggestion. hm – -people….! Right down the road was a Starbuck’s. The employee in the right hand part of the collage loved working at Starbuck’s so much that her ultimate career goal was to become a district manager.  All the employees here were awesome. And lately my mother has this thing about not “being on the phone” while at eateries with her. I like her MO, but feel there are times when we might need some phone reprieve. Um, like when people are together for three days straight – it is actually a good thing to get on the phone (for a bit) while stopping for tea/coffee and food. But she was not having any of it – ha – and we ended up talking to the guy in the lower right part of the collage. He was 100% Irish and it is rare to meet someone 100% of anything. Well that is enough jibber jabber from moi – let’s wrap up this post with some photos:

Linking to Sunday Trees (here) with this next photo, which was taken outside of a different art show in Charlottesville, VA: They had a box with free books – this one (on Psychoanalysis) had an old post card in it:

One of the leaves from the art show hitched a ride home with us (on the back floorboard).  I had to grab a photo of it to share in Dawn’s Festival of Leaves (here).

Here are some art show pics (some of the pieces were listed on that flyer): 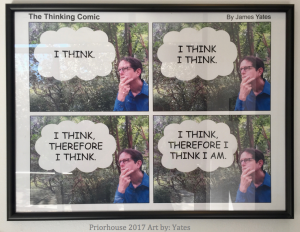 Be back soon to share my Interview with Yoga Teacher Nancy Kim, which is the first of three interviews I have lined up for October.

an online journal of short writing

Retired? No one told me!

Tonight I Dream. Tomorrow I Do!

Loving God with your whole heart, soul, mind, and strength

never judge a girl by her weight