This week Pegman takes us to Pripyat, Ukraine. The challenge is to write up to 150 words inspired by the location.

From wiki: “Pripyat is a ghost town in northern Ukraine, near the Ukraine-Belarus border. Named after the nearby Pripyat River, Pripyat was founded on 4 February 1970, as the ninth nuclear city in the Soviet Union. It was later evacuated on April 27th, 1986 – the day after the Chernobyl disaster. Because of radiation in the region surrounding the former Chernobyl Nuclear Power Plant, the area won’t be safe for human habitation for at least 20,000 years.

Here is the photo prompt: 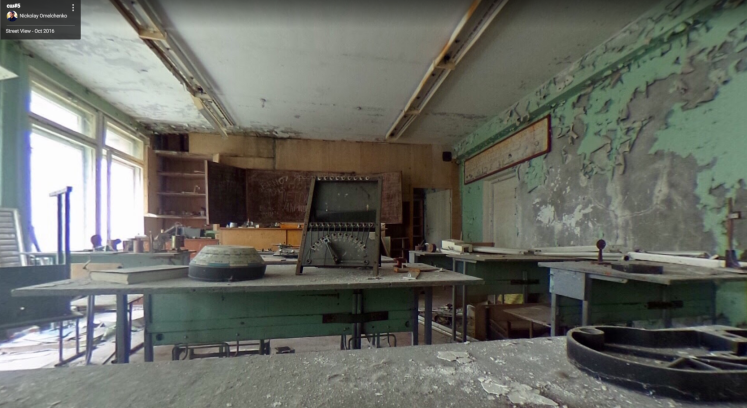 Here is my fiction:

“Senora, no need preciso. Curator said okay adjustar. Sus only artroom. All other rooms we build not preciso.  Nobody notice un poco off. Tiny bit off est okay. Okay?”

Vybachte?? No. Incorrect. Muy incorrecto.  Details matter. It’s not matter of others noticing. It’s about integrity. Quality, amigo. Not sure about the other rooms you’ve built. But this one is honoring the dead. This is moya rodyna… mi familia, mi Grandfather Medvedev.

Jose, My abuelo learned engineering in this room. In 1991 he wrote book about Chernobyl nuclear disaster – spoke truth about mistakes made – and it cost him home country honor. We cannot cut corners while building zis Interior to HONOR him.   Do you understand?  Enetender, Jose?

Si, no cutting corners on walls – if we do that – all walls fall.  Si, Senora!

Care to join in or read more fiction with this location?

The main character (MC) here is the Senora, and she is in charge of the installation of a “period interior,” which will provide a replication of the room in the photo above (in my fiction here it was where her grandfather learned his trade). I got the idea after admiring the Worsham-Rockefeller bedroom “period Interior” (here) last week.

I had a little fun with trying to make the construction worker American-Mexican while the director, our senora, was American-Ukrainian (need some grace with that attempt).

The entire fiction was inspired by the Ukrainian engineer Grigori Medvedev. In 1991 he wrote a book, The Truth About Chernobyl, which won an LA Times award, but also caused him a lot of trouble in his home country.  Medvedev was an engineer assigned as the key investigator after Chernobyl exploded. He pointed out what was and what was not done (and how cutting corners cost them safety). His book highlighted the “pervasive, institutionalized, bureaucratic incompetence leading up to the accident; and heroic, heartbreaking sacrifice among those who had to deal with the emergency afterwards” (more here).

Also, the 2008 film, White Horse, documented Maxym Surkov’s return to his house in Pripyat, which was near ground zero.  When Surkov was visiting his old apartment, he saw “an old calendar on a door, he rips a large portion off, claiming “the year ended on April 26th”

So I Imagined that Grigori Medvedev might say that his old life ended in 1991, after he was brutally honest about what led to the explosion, and his honesty cost him rejection.

Lastly, Here is the message I hope we can all take away: “Yes, Jose, we no cut corners, or walls fall.”

Do things right or don’t do them.

A man with dyslexia writing about this and that and everything else!

Matthew 16:28 NIV "Truly I tell you, some who are standing here will not taste death before they see the Son of Man coming in his kingdom."