Joining in with What Pegman Saw, which brings us to Riga, Latvia for this week’s FLASH FICTION writing challenge.

Here is the photo prompt for today’s fiction: 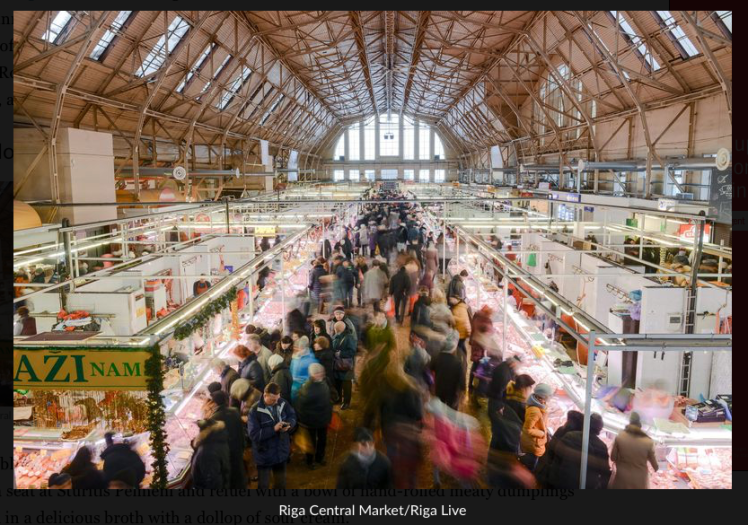 Finding a Spark in Riga

When work becomes familiar, it can lose its spark.

I was getting paid to write about Riga’s Art Nouveau buildings, but burnout had me.

After the fourth trip to the market, conversations with Michal took off.  His family helped make the first rigid airships, dirigibles, and his grandfather helped build the end of the hangar that housed the Central Market.

When he discovered I was from New Jersey, he went on a tangent about the Hindenburg airship disaster of 1937.  “Hoehling’s book was wrong,” Michal insisted. “No conspiracy. Static spark caused crash. The airship passed humidity and high electrical charges – caused fire.”

I smiled while listening. Grateful his passion spread my way because his energy helped me write about architecture with zest.

I gave Mischal a small salt lamp as a goodbye gift.

On the card, I thanked him for the static spark he gifted me during my month in Riga.

The photo prompt I chose for today had the Central Market in Riga, Latvia, which is in an old airship hangar.  This had me thinking about what it would be like to work a booth in this old structure. Perhaps there was someone there with connections to the history of the old hangar? The character Michal came in at that point because I imagined his family had connections to the early 1900’s when rigid airships were in vogue. Rigid airships are the ones that needed to be housed in hangars to protect them from harsh weather; they had an internal framework that didn’t deflate (like a blimp would) when the air pressure was off. This led to the mention of the Hindenburg disaster in 1937. The Hindenburg was a German airship that caught fire while trying to dock at Lakehurst, New Jersey. 13 people died and it was the beginning of the end for the popularity of rigid airships. Hoehling’s (1962) book provided arguments as to why the airship was sabotaged, but others around the world argue with the Static Spark hypothesis, which Michal supported.

Also, while looking up Riga, Lativia – I learned that Riga is a UNESCO World Heritage Site and it has architectural treasures – with over 500 buildings depicting various styles like  gothic, baroque, modern, and art nouveau. So my main character was doing work he loved, writing about artsy structures, but was also experiencing a bit of humdrum while doing work he loved. And sometimes the energy of someone we meet can refresh us. #bettertogether

Thanks to Karen and Josh for hosting this challenge.

35 thoughts on “Finding a Spark in Riga, Latvia (Micro Fiction)”