During August, we had some fun dog-sitting days. A couple of times we walked them around downtown Richmond, VA.

First, the doggies, and following up with my chat with Trent about a weekly smile.

Second, a view from the footbridge: This sculpture is called The Headman and it is in honor of the many African-American skilled boatmen and their contribution to the industrialization in this area.

In this next photo we see some new art that is getting ready to be unveiled. This heart was found on the footbridge. 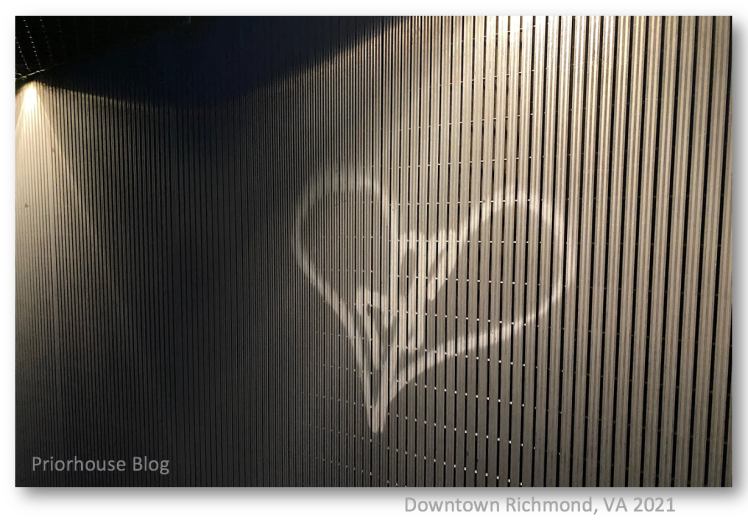 It has been a while since I shared something from Les Misrables by Victor Hugo. The heart on the bridge had me looking for a passage to connect with it – -so…. for those in the mood to skim some Hugo, I call this passage “exit joy” (and not sure if you have ever felt extreme exit joy before – but it sure can be a great experience – especially after patiently waiting something out or biding one’s time):

“On waking up, Cosette had run to get her shoe. In it she had found the gold piece. It was not a Napoleon; it was one of those perfectly new twenty-franc pieces of the Restoration, on whose effigy the little Prussian queue had replaced the laurel wreath. Cosette was dazzled. Her destiny began to intoxicate her. She did not know what a gold piece was; she had never seen one; she hid it quickly in her pocket, as though she had stolen it. Still, she felt that it really was hers; she guessed whence her gift had come, but the joy which she experienced was full of fear. She was happy; above all she was stupefied. Such magnificent and beautiful things did not appear real. The doll frightened her, the gold piece frightened her. She trembled vaguely in the presence of this magnificence.

The stranger alone did not frighten her. On the contrary, he reassured her. Ever since the preceding evening, amid all her amazement, even in her sleep, she had been thinking in her little childish mind of that man who seemed to be so poor and so sad, and who was so rich and so kind. Everything had changed for her since she had met that good man in the forest. Cosette, less happy than the most insignificant swallow of heaven, had never known what it was to take refuge under a mother’s shadow and under a wing. For the last five years, that is to say, as far back as her memory ran, the poor child had shivered and trembled. She had always been exposed completely naked to the sharp wind of adversity; now it seemed to her she was clothed. Formerly her soul had seemed cold, now it was warm. Cosette was no longer afraid of the Thénardier. She was no longer alone; there was some one there.

She hastily set about her regular morning duties. That louis, which she had about her, in the very apron pocket whence the fifteen-sou piece had fallen on the night before, distracted her thoughts. She dared not touch it, but she spent five minutes in gazing at it, with her tongue hanging out, if the truth must be told. As she swept the staircase, she paused, remained standing there motionless, forgetful of her broom and of the entire universe, occupied in gazing at that star which was blazing at the bottom of her pocket.

It was during one of these periods of contemplation that the Thénardier joined her. She had gone in search of Cosette at her husband’s orders. What was quite unprecedented, she neither struck her nor said an insulting word to her.

The stranger took up the bundle which he had brought and untied it. This bundle contained a little woollen gown, an apron, a fustian bodice, a kerchief, a petticoat, woollen stockings, shoes—a complete outfit for a girl of seven years. All was black.

“My child,” said the man, “take these, and go and dress yourself quickly.”

Daylight was appearing when those of the inhabitants of Montfermeil who had begun to open their doors beheld a poorly clad old man leading a little girl dressed in mourning, and carrying a pink doll in her arms, pass along the road to Paris. They were going in the direction of Livry.

It was our man and Cosette.

No one knew the man; as Cosette was no longer in rags, many did not recognize her. Cosette was going away. With whom? She did not know. Whither? She knew not.

Poor, gentle creature, whose heart had been repressed up to that hour!

Cosette walked along gravely, with her large eyes wide open, and gazing at the sky. She had put her louis in the pocket of her new apron. From time to time, she bent down and glanced at it; then she looked at the good man. She felt something as though she were beside the good God.”

Closing with kayakers in the distance:

CARE TO JOIN in with the Lens-Artists Photo Challenge? Here are the hosts:

Another Way of Looking at Your Business

All those moments will be lost in time, like tears in rain!

A time of exploration and growth with some fun added. Come on my adventure.

Honoring the Legacy of WWII Service

Welcome to my REAL world

A Life of Faith inspires me - let it inspire you too!

Living and Leading for Educators and Learners

I AM therefore I Write. Official site of Marie A Bailey, writer, knitter, and stray cat magnet.

CROSSON the world the WRIGHT way!