Hello Readers. The Photo Challenge this week is What’s Your Groove?

Finding my groove sometimes involves looking for something interesting to capture in a 10-minute photo shoot.  And I am sure most of us know that this activity helps us see the beauty that is all around us!  Beauty we might become blind to; beauty that can be highlighted in a photo.

I noticed bricks and foliage on an old loading dock in Richmond, Virginia. From far away it looked like this: 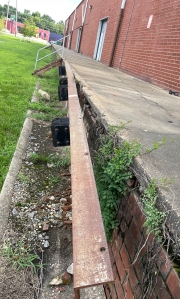 A photo allowed me to highlight line design and a cascading vibe on the interesting bricks:

I also saw a bit of design in the cracked and melted paint.

The theme (about what is your groove) connected to my summer 2022 learning more about Winston Churchill.

My favorite Churchill quote reminded me that whatever “life groove” we might have – and then maybe whatever groove we do “not” have – we should AlWAYS remember three things:

As I discovered more about Churchill’s quirky ways, excellent orating skills, and his tenacious fighter side – this led to the sad part about his huge displacement after WWII!   Churchill had such a groove as PM during WWII (and I think it was a divine appointment, perhaps like Esther, where previous life setbacks strategically positioned them for “such a time as this” – to help save their people).
But after finding such a key leadership groove, Churchill was rejected, sidelined, and gravely displaced, which reminded me how quickly favor can shift!

In a groove one day and cut down or silenced the next!

–
This last week, we had the chance to watch a few more episodes from “The Morning Show” (2019) – which is an APPLE TV Emmy-winning series. This star-studded show (including a guest appearance from the awesome  Martin Short) depicts the facade that exists in the workplace (and often in life). The excellent writing gave us takeaways about status and perceptions, power, fear, fairness, sloppy living, truth telling, deception, relationships, and ethics.

The character Mitch Kessler (Steve Carell) is in major crisis. Mitch was in a career groove and then was axed! Allegations of sexual misconduct came out (height of the Me Too movement) and the part that resonated with me was how Mitch was silenced!

Mitch is distraught because of being silenced, and in one scene, he desperately exclaims, “They won’t even engage in a discussion with me?”

Do you know what this feels like – to be accused and then not allowed to even be engaged in a  discussion? I think this kind of treatment might be one of the biggest assaults on human dignity!

If you don’t know what it feels like to be silenced or not allowed to speak – it hurts!

And Mitch is in shock because he cannot even be part of the discussion (this is egregious).

Being silenced feels like someone put their foot on the back of your head and pressed your face into the grass!

The last thought I have about finding a groove – and connecting to photography – happened last week when I met a former student for coffee. I brought a little card game and we played it for about 25 minutes and then chatted (the only reason I had the game was because I was cleaning out the guest-room closet – Getting rid of more stuff – and found this little game and thought she might want it). Anyhow, as we tried to guess the correct words, we gave each other extra hints, which was fun. She gave me a hint for the word “documentary” and It still brings me joy! The clue she gave me for the word documentary was “the reason why you take so many pictures.”  Hahaha – indeed that IS one of the reasons why I take so many darn photos 📸.
I asked her to say it again so I could record it – she did – and here it is.

One reason this little moment brought such a huge smile is because this person knows me! She knows my groove (always taking pictures- lol) and she also knows some of my life dreams…. Gosh, it felt good to be “known” and maybe times like this – well maybe they make up for the times we don’t feel perceived properly! Times of feeling heard and known can assuage times of feeling misunderstood, not heard, and gravely displaced.
Can you relate?

BEAUTY IN FINDING A GROOVE:

FindIng your groove feels like a bit of floral beauty in the midst of tangles.

To Join the Challenge this week- check out Anne Sandler’s blog.